A roof will shortly be fitted to a giant tank being built by INEOS at its Grangemouth site to receive shale gas ethane imported from the US. 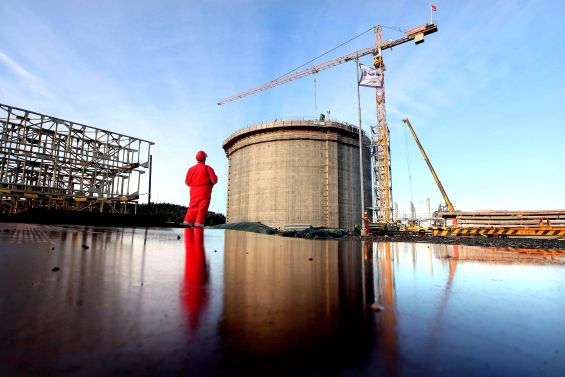 The tank will be capable of holding 60,000 cubic metres of ethane, and is expected to be operational in the second half of 2016.

Ethane is a feedstock used to make ethylene, which is used as a key building-block in the manufacture of a range of common chemicals and plastics.  It’s also used to control the ripening of fruit, to promote crop growth in agriculture, in the production of automotive glass, as an anaesthetic, in metal cutting and welding, as a refrigerant, and in the extraction of rubber.

INEOS says that long-term contracts (15 years) have been agreed with suppliers to pipe ethane from US shale fields to purpose-built export facilities on the East and Gulf coasts of America.  From here the gas will be shipped across the Atlantic in a fleet of eight specially designed Dragon-class ships commissioned by INEOS, which will deliver ethane to both Rafnes and Grangemouth.

The project, which will have cost £500m by completion, will return the Grangemouth site to profitability helping to secure its long term operation, protecting the viability of its businesses and the many direct and indirect jobs that the site provides.

The use of shale gas ethane demonstrates that fracking in the UK and elsewhere isn’t just about energy.

The hunt for a Scottish source of shale gas

Meanwhile, INEOS is continuing its efforts to create a more local source of shale gas in Scotland.

In 2014, it announced plans to invest £640m in UK shale gas exploration and, in March this year, it teamed-up with shale gas explorer IGas Energy, in a deal that gives it access to around a quarter-of-a-million acres of potential shale gas reserves.

Speaking at the time, Gary Haywood, the chief executive of INEOS Upstream, said: “This is a further significant step for INOES in its plan to become the biggest player in the UK shale gas industry.

“We believe shale gas could revolutionise UK manufacturing and INEOS has the resources to make it happen, the skills to extract the gas safely, and the vision to realise that everyone must share in the rewards for UK shale gas to be successfully developed.”

A domestic source of shale gas would give INEOS a strategic advantage over its European competitors and enable it to better compete with rivals in the US and the Middle East.

But it would also secure existing jobs whilst creating many others, and enable it to obtain more of the feedstock it needs without the attendant climate emissions associated with shipping shale gas ethane from overseas in liquefied form.