What do groups like Friends of the Earth really think about #fracking?

In the last few years, groups like Friends of the Earth and Greenpeace have been leading the charge against fracking in the UK, and particularly in Lancashire where FoE is currently preparing to participate in an upcoming public inquiry as part of Cuadrilla’s appeal against the refusal of planning permission. What do these groups really think about fracking?

Literature, online articles and social media posts produced by these groups often contain references to a range of environmental and health impacts that are presented as certain to befall parts of the country where shale gas extraction goes ahead.

But are they really concerned about these risks, or are they being used to stir up local opposition as part of a broader campaign against fossil fuels more generally?

In 2013, the House of Lords economic affairs a committee invited a range of experts and other interested parties to give evidence to a Parliamentary inquiry into the potential economic benefits of shale gas and oil.

On Tuesday 22 October 2013, representatives from Friends of the Earth (FoE), Greenpeace and the World Wildlife Fund (WWF) appeared before the committee and were questioned at length about their views.

A written transcript of the oral evidence taken is publicly available here.

We decided to examine this evidence using a keyword search to try and establish the key themes emerging from their comments, expecting to find strong evidence of the environmental and health impact claims promoted elsewhere by these groups.

What we actually found can best be summed up by these comments:

“our organisations are opposed to the development of shale gas in the UK, mainly on grounds relating to climate change”

Our keyword search yielded the following results. You can see that we grouped them according to themes, including those that are repeatedly advanced as reasons not to explore for shale gas. 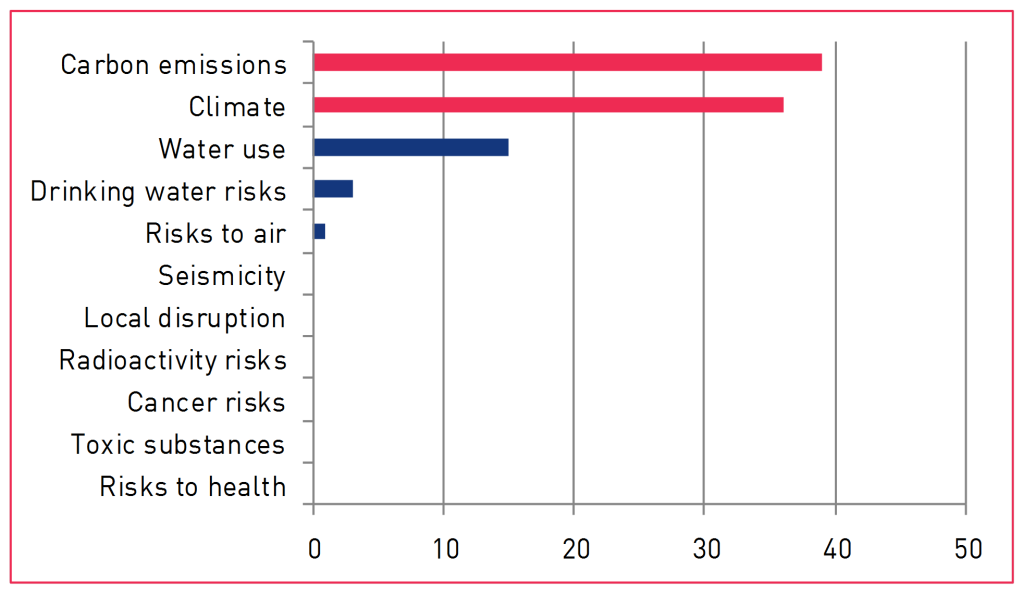 The results of the keyword search are quite instructive, and accord with the statements made by both Craig Bennett and Nick Molho that green groups are opposed to shale gas extraction on mostly climate grounds, and not the risks to air, water and soil that are much talked about.

But it is perhaps this comment from Dr Doug Parr, Chief Scientist at Greenpeace, that is most telling of all:

What, then, is the public to make of claims from FoE, for instance, that were contained in a fundraising leaflet distributed last year – concerning health risks from air pollution and a so-called “cocktail of toxic chemicals” when none of those claims was made in Parliament?

Why did these three green groups shy away from the emotive, alarmist language that they use elsewhere, when giving evidence to a Parliamentary Select Committee?

It seems that their messages are being carefully crafted for specific audiences: calm, rational, moderate and more scientifically literate when communicating with policy chiefs and decision-makers in Government, but full of emotive claims about health impacts and house prices when communicating to the public.

The only plausible explanation for this difference is the objective behind the message.

Certainly, when communicating to the public, it appears the objective is to stir objection to fracking by appealing to the human tendency to fear the new and the unknown, and by portraying the things we value most as being at risk: our homes and our children’s health.

And yet, as the Parliamentary evidence confirms, groups like FoE and Greenpeace do not seem overly concerned with these risks, and can therefore only be promoting them in order to advance their real goal – which is perhaps to form a broader coalition against all forms of fossil fuel extraction and use because of concerns about climate change.

However, the public don’t need to be frightened into opposing fracking in order to encourage backing for climate action. According to Wave 13 of the DECC Public Attitudes Tracker, when asked directly, two thirds of people (66%) reported feeling very or fairly concerned about climate change.

The evidence clear. In the UK, onshore oil and gas extraction is well regulated, and the risks are well understood and appropriately controlled. Exaggerated claims about these risks have no place in meaningful debate.

You can see the results of our keyword search in tabular format here.